A Diffuse Rash in a Patient Infected with HIV

A Diffuse Rash in a Patient Infected with HIV

A 27-year-old MSM, presented to care with a rash. The rash appeared several weeks prior to presentation and involved the face, chest and back, arms and legs and was not accompanied by pruritus. He denied fever, chills, but complained of fatigue. No respiratory, gastrointestinal or urinary symptoms were present. He disclosed a diagnosis of HIV infection a year earlier, but has not kept his follow up appointments and was not receiving anti-retroviral medications or opportunistic infection prophylaxis. His most recent CD4 count was 109/mm3. He admitted sexual encounters with several male partners with inconsistent condom usage, and recalled a penile lesion that was present several weeks before the rash had appeared. The lesion has healed without specific therapy.

On physical examination: in no apparent distress, vital signs were within normal limits.

Notable finding on the examination included multiple small and non-tender anterior cervical, posterior cervical, axillary and inguinal lymph nodes. Genital examination revealed a healed lesion on the glans penis. A macular skin rash was widely distributed over face, trunk and extremities with several lesions on palms and soles (figure 1. and 2.) 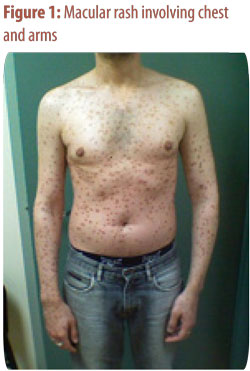 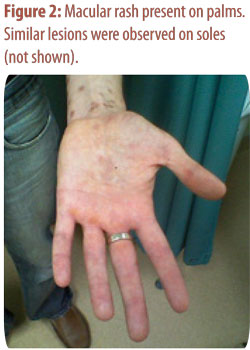 1. What is your diagnosis?
2. Would you obtain a lumbar puncture?

HIV and the Older Adult: Challenges in Prevention and Treatment

HIV and the Older Adult: Challenges in Prevention and Treatment

HIV/AIDS is rapidly increasing among adults age 50 and older. However, limited research has been conducted to understand the issues associated with HIV/AIDS in advancing age. This paper describes issues related to the transmission and contraction of HIV/AIDS among older adults, their complex clinical picture, and management of antiretroviral therapy, as well as social considerations. Cognizance of polypharmacy and comorbidities common with advanced age as well as the double stigmatization of age and HIV/AIDS is essential. Further research is needed to better understand the interactions between HIV/AIDS and age, and to determine effective, safe treatments and appropriate highly active antiretroviral therapy dosing in older adults.
Key words: HIV, AIDS, sexually transmitted diseases, older adults, highly active antiretroviral therapy.

Kaposi’s sarcoma (KS) is a malignancy closely associated with human herpesvirus-8 (HHV-8). KS occurs in immunocompromised subjects—those with HIV infection or after immunosuppressive therapy—but it also occurs without obvious immune deficiency (older men of Mediterranean origin or in central Africans). The incidence of KS in Acquired Immunodeficiency Syndrome (AIDS) has markedly decreased in recent years. Treatment depends on the predisposing condition and the extent of disease. Common management options include no therapy, reversal of immunosuppression, local radiation, and systemic chemotherapy.

HIV Moves Around the World and Up the Age Ladder

HIV Moves Around the World and Up the Age Ladder

Recently, the bulk of media attention has fallen on the global HIV pandemic, and on the impact it is having in Africa. In North America, although AIDS is still predominantly a disease of young adults, an aging but relatively healthy population of HIV positive individuals is slowly becoming a cohort of HIV positive elderly. A review of recent medical literature reveals few, if any, articles that deal with AIDS in elderly patients. The absence of research in this field will mean a medical community that is unprepared to treat and diagnose HIV in an older population. Consequently, elderly patients may not receive the degree of care and attention that they deserve. At Geriatrics & Aging, we strive to cover the latest medical developments and issues, even those that may be somewhat controversial. This month we are proud to present an article contributed by Dr. Brian Conway, an international leader in the field of HIV research, on how HIV is 'moving up the age ladder'.

Introduction
Although it may be assumed that the HIV epidemic is waning, it must be remembered that by the end of 1999 there were still over 33 million adults and children living with HIV/AIDS throughout the world.1 Of these, the vast majority (32.4 million or so) are adults. In the United States, there are over 400,000 adults/adolescents living with this disease.