Dr. Graydon Meneilly introduced his discussion of type 2 diabetes among older adults by emphasizing the condition’s underestimated prevalence. One in four older adults over age 60 has diabetes, yet ~50% are unaware they have the disease, underscoring the need for improved screening protocols.

Glycemic Control in Older Adults with Diabetes
The British Geriatrics Society, in conjunction with the European Association for the Study of Diabetes, established two sets of therapeutic goals for older people, the first of which applies to healthy, active older persons with diabetes. Their fasting glucose is targeted between 4-7 mM; the 2-hour postmeal sugar at 7-10 mM, and HbA1c at <7%. The forthcoming Canadian Diabetes Association (CDA) guidelines may offer a more aggressive HbA1c target; however, Dr. Meneilly does not recommend that HbA1c be targeted lower than 6.5% in older adults, as aggressive lowering has been associated with adverse events.

Glycemic Goals for Frail Patients
The second set of glycemic control goals apply to frail patients and target fasting glucose from 7-9 mM, the 2-hour postprandial sugar at 10-13 mM, and HbA1c at <8.5%. The renal threshold for glucose increases with age, so patients will not develop glucosuria at these glucose levels. It is not known whether this level of hyperglycemia could increase the risk of infection, worsen cognitive function, or adversely affect important health parameters for this patient segment. Some feel more stringent criteria should apply, but data are insufficient and cannot support a recommendation.

Controlling blood sugar appropriately in frail patients is key. Many doctors outside of geriatric medicine do not know how to modify the medical approach to diabetes that frailty requires.

Treatment of Other Risk Factors
Dr. Meneilly emphasized that treatment of hypertension in older adults with diabetes significantly modifies CVD and mortality risk.1

European guidelines recommend a target of less than 140/90 mm Hg. The benefits of reduced hypertension are clearly established but level off with increasingly aggressive treatment; benefits are less once BP targets are aimed <140. Comparably, with HbA1c, there is a great effect if patients drop from 9 to 8, but a reduced health yield with a reduction from 7 to 6. Treatment that achieves a systolic BP ≤140 is the best approach, Dr. Meneilly stated.
A second pillar of sound risk factor modification targets hypercholesterolemia with statins. Data from the Heart Protection Study show that persons over 65 with diabetes treated with statins experience a reduced risk of CV events by 20%; treatment of hyperlipidemia with statins in diabetics strongly benefits vascular outcomes.2

As for specific lipid targets, European guidelines aim for an LDL of ≤2.5; forthcoming CDA targets may be more aggressive. The benefit curve for LDL seems to flatten out below 3, he observed, adding among very old adults, the higher the patient’s cholesterol, the greater the longevity benefit. Dr. Meneilly does not test lipids in patients over age 85, or alter treatment if the patient has been stable on a statin for years.

Significant progress must be made in modifying diabetes and its associated risk factors, Dr. Meneilly urged. A recent study that examined the quality of diabetes control among older adults using NHANES data found that glycemic control targets are being met with limited success.3 When control of lipids or blood pressure are used as a measure, few patients had LDLs of less than 2.5; management of BP was even poorer. These are important factors to treat, Dr. Meneilly advised.

Current Treatments for Older Adults with Diabetes
Metformin
Metformin decreases hepatic glucose output and lowers fasting glycemia, and improves insulin sensitivity, making it a good choice for older adults. It is a useful drug to add as a second agent.

Some patients do not tolerate metformin well on initiation, making slow titration essential. Further, there are cases of delayed onset of weight loss as a side effect, sometimes occurring after years of treatment. The second problem affecting use of metformin is its contraindication in the setting of creatinine clearance <50, due to the risk of lactic acidosis, which occurs when patients with impaired renal function experience lactate-producing illness (e.g., acute heart failure, sepsis). Metformin should be discontinued during these illnesses.

Thiazolidinediones
Another class of agents used for this patient segment are the insulin sensitizers, the thiazolidinediones (TZs), whose glucose-lowering effects are mediated through improved insulin responsiveness in skeletal muscle, facilitating glucose uptake and utilization. Pioglitazone and rosiglitazone, used as monotherapy, are effective and can reduce HbA1c up to 1.5%. One of their chief benefits is that they allow the patient to be maintained on monotherapy for longer periods. The United Kingdom Prospective Diabetes Study (UKPDS) showed that HbA1c worsens over time, requiring institution of combination therapy.

Adverse effects associated with TZs in this patient segment include a two- to threefold increase in the risk of edema. Older patients with heart failure should not take them. Further, in women, rosiglitazone and pioglitazone decrease bone density and are associated with increased fracture risk. The final concern is their impact on CV events. Pioglitazone seems not to elevate the risk and offers less risk than rosiglitazone; Dr. Meneilly’s policy is to use pioglitazone alone, and only in men. Some patients prefer this agent as they wish to avoid insulin therapy.

Alpha-Glucosidase Inhibitors
Among this class, Dr. Meneilly specifically discussed the action and efficacy of acarbose, which acts by reducing absorption of glucose from the GI tract. It is effective as monotherapy among obese older adults with a contraindication to metformin, but does not offer optimal lowering of HbA1C. Roughly 1/3 cannot tolerate it for GI side effects; however, it does reduce postprandial blood sugars, suggesting good CV outcomes, but this requires further study.

Drugs Targeting Insulin Secretion: Sulfonylureas
Sulfonylureas lower glycemia by enhancing insulin secretion, and they lower HbA1c by ~1.5 %. Problems with this class of agents include a potential increase in CV risk, as with glyburide, which also increases the risk of severe hypoglycemia in older adults. There are sulfonylurea-like agents with better risk profiles that can be used, such as gliclazide, and glimepiride. The glinides repaglinide and nateglinide increase insulin secretion by a different mechanism than the original sulfonylureas. These are the closest oral agents available to rapid-acting insulin.
Regarding use of gliclazide in older patients, the cumulative frequency of hypoglycemia with glyburide is substantially greater than with gliclazide.4 Head-to-head studies suggest that long-acting gliclazide is associated with a lower frequency of hypoglycemia than glimepiride among older adults, which is in turn associated with a lower frequency of hypoglycemia than glyburide.5

Glinides
The glinides have a shorter circulating half-life than the sulfonylureas and must be administered more frequently. Glinides have been shown to reduce HbA1c by just under 1% in patients over 65.6 Dr. Meneilly described their advantage as the capacity to approximate a more physiological insulin profile, mimicking normal insulin secretion. Head-to-head studies of the glinides vs. glyburide showed that the latter did not result in insulin secretion earlier on but did result in substantial hyperinsulinemia a few hours after a meal. By comparison with glyburide, glinides reduce hypoglycemic events, and attenuate late postprandial drops in blood sugar. These agents are particularly effective in patients with erratic eating habits, in whom long-acting agents would be inappropriate.

Incretin Peptides
Dr. Meneilly has become interested in the mechanism of action and therapeutic potential of incretin peptides, especially in the pathophysiology and treatment of carbohydrate metabolism and diabetes in older adults. The effects of incretins are involved in the stronger insulin responses to oral over IV glucose.7 New research of interest to Dr. Meneilly involves the study of hormone activity in response to food intake, which could potentiate insulin secretion.
The two major incretins that do so are glucagon-like peptide–1 (GLP-1) and glucose-dependent insulinotropic peptide (GIP).

Among the new incretin therapies on the market and/or being tested for treating diabetes in older adults are GLP-1 and its mimetics, the GLP-1 analogues, and the incretin enhancers (inhibitors of dipeptidyl peptidase 4 [DPP-4]), which inhibit breakdown of endogenous GLP. Exenatide, a GLP-1 mimetic administered by subcutaneous injection twice daily, results in significant weight loss; a once-weekly form of administration is in development.

The DPP-4 inhibitors are a class of oral hypoglycemics whose advantages include efficacy, ease of use, and lack of hypoglycemia or weight gain; in older patients they may result in weight loss.8 By preventing the degradation of the incretin hormones, predominantly GLP-1, DPP-4 inhibitors prolong GLP-1 action, resulting in stimulation of insulin and inhibition of glucagon secretion, in a glucose-dependent manner (Figure 1). They may also promote expansion of B-cell mass via stimulation of cell proliferation and inhibition of apoptosis. 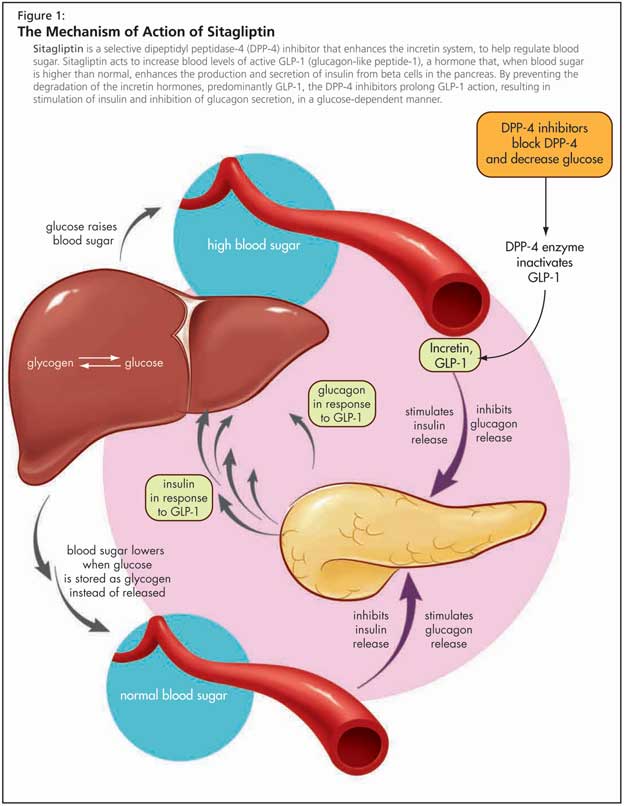 DPP-4 levels are reduced in older adults and as a consequence Dr. Meneilly had originally questioned whether the inhibitory action would work in older adults, but study data are positive.9 Preliminary study results suggest substantial increments in glucose-induced insulin secretion in older adults with diabetes treated with sitagliptin, a DPP-4 inhibitor, in conjunction with oral glucose, but more clinical trial data is needed, Dr. Meneilly stated. Sitagliptin is used either alone or in combination with other oral antihyperglycemic agents (sitagliptin is approved in Canada as combination therapy with metformin); sitagliptin and the other DPP-4 appear to be equally effective in older and younger patients.10 Adverse effects include a slightly elevated risk of upper respiratory infection, which needs to be carefully monitored in older patients.

Among the insulin formulations of clinical value in this patient segment, Dr. Meneilly included insulin glargine, a long-acting basal insulin analogue. A study of once-daily insulin glargine plus metformin versus premixed insulin found greater reductions in HbA1c than premixed insulin; risk of hypoglycemia was significantly lower.11 Dr. Meneilly finds insulin glargine very useful in those patients who require insulin therapy to maintain normal or near-normal glucose levels and benefit from a once-daily formulation (e.g., in those who do not self-administer their medication).

Similarly, insulin detemir, a long-acting human insulin analogue, offers benefits in reduced HbA1C levels compared with NPH, but without the same risk of hypoglycemia and with lower weight gain. Dr. Meneilly advised clinicians to be aware of unit differences (by comparison with other insulin analogues, more detemir is generally needed for the same effect).12

Conclusion
Dr. Meneilly concluded by stressing the importance of lifestyle modification in the prevention of diabetes. Improvements in diet appear to be as or more effective than physical activity.13 Pharmacological adjuncts can support the effects of lifestyle interventions; however, some agents fail to offer a sufficiently safe side effect profile. Future avenues of research in pharmacological therapies, such as the role of incretin peptides in delaying progression to diabetes, suggest promising avenues for modifying the incidence and severity of diabetes in older adults.