Why Prescribing for Older Adults Is Complex
He underlined how difficult basic prescribing can become in what he called “a typical case”:
An 85-year-old woman is brought to the ER by her concerned spouse. She is suffering confusion, nausea and vomiting, and is quite thin—presenting with a syndrome often labeled as “general deterioration.” Her husband reports her condition has recently worsened, that she needs more of his help to manage her activities of daily living, and that her alertness varies during the day. The patient’s medical conditions include: diabetes, hypothyroidism, hypertension, congestive heart failure, atrial fibrillation, previous stroke, and a 2-decade history of polymyositis. Examination reveals a BP of 110/70 and a slowed pulse of 40 beats/minute. Significant abnormal lab tests included: INR=8.3, serum digoxin level 3.24 nmol/l, TSH=0.24, and a creatinine clearance of 21 ml/min.

Dr. Huang described this degree of polypharmacy and its consequences as an unintended effect of the straightforward prescription approach, which involves identifying a patient`s medical conditions, and then using standard drug therapy. However, altered pharmacokinetics and pharmacodynamics, and the multiple comorbidities commonly present in older adults frequently complicate this approach (Figure 1). 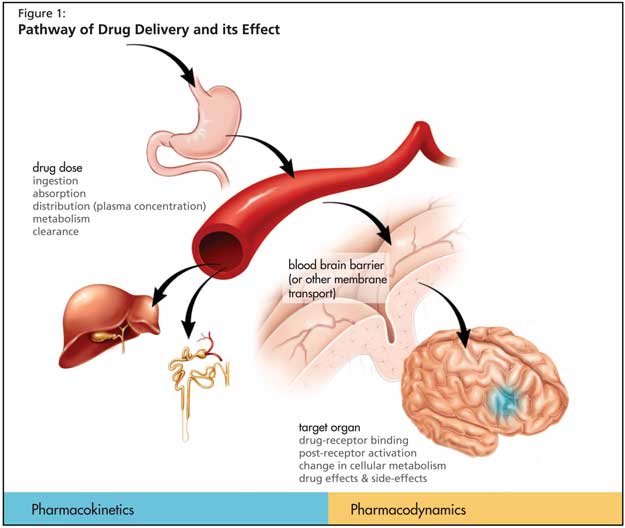 Additional Complexities
Additional complexities, Dr. Huang noted, come from pharmacogenomics and pharmacoepidemiologic data. He then drew listeners’ attention to additional problems of drug-related illness (involving drug-drug and drug-disease interactions), and the challenging task of information management since more drugs are dispensed to the older adult population. He reminded those in attendance that drug costs now account for the greatest proportion of health care costs, over hospitalization-related expenses.

Dr. Huang detailed the results of a 1990 study in Quebec that sought to clarify prescribing practices for the older patient segment. At that time, full drug cost coverage was offered under the provincial health plan. Researchers found that high-risk prescribing patterns (drugs such as long half-life benzodiazepines or risky combinations such as high-dose acetylsalicylic acid plus warfarin) increased with the number of prescribing physicians and dispensing pharmacies involved. Another study found that when the province of Quebec implemented a cost-sharing drug plan, the consumption of medications by older people decreased, and distressingly, sometimes with essential medications.
Finally, the consequences of these problematic patterns of drug prescribing, patient consumption, and treatment adherence are further complicated by the fact that older adults are a fundamentally non-homogeneous population. Age alone is a poor determination of the consequences of pharmacotherapeutic decisions. Given these factors, Dr. Huang described the capacity of the physician to optimize prescribing in older adults as a difficult task.

Optimizing Drug Therapy
Dr. Huang noted further challenges facing physicians in a practice environment where they are frequently bombarded with the marketing of new drugs, some of which are merely “me-too” drugs. Many of these new drugs have often not been studied specifically in the older patient population, especially in the setting of polypharmacy and multiple medical comorbidities.

Dr. Huang described the important phenomenon of the medication cascade, where side effects of one drug can be misinterpreted as a new condition. Adding a new prescription (instead of stopping the offending medication) to solve this situation can lead to a cascade that results in drug-related illnesses, as in the case of the 85-year-old woman described. Dr. Huang advised listeners to avoid prescription pitfalls by referring to “The Safe Prescribing Toolbox” (Table 1). 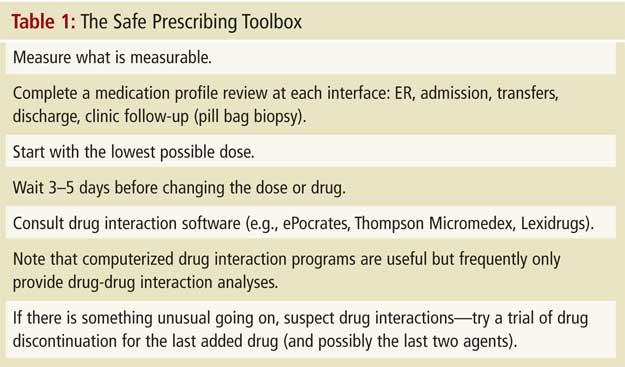 Recommendations and Conclusions
According to Dr. Huang, it is possible to optimize drug therapy for the older patient population, despite the challenges described above. Physicians can review and stop drugs that no longer have an indication for ongoing use, or that are associated with a time-to-benefit exceeding an individual patient’s life expectancy. Other helpful actions include reviewing medication regularly (especially at care transitions such as hospital discharge), monitoring for alcohol use, selecting drugs from different “generations” within a class (which are likely to involve different metabolic pathways), and screening for drug interactions using software tools. He further advised that listeners try to avoid drugs with a narrow therapeutic index when better alternatives exist, work to attain a lowest-effective dose, and integrate a close monitoring plan when a potential drug–drug interaction cannot be avoided.

Because the foregoing can be a challenge for busy clinicians, the work can be shared with other professionals on the health care team. Nurses, physiotherapists, and dieticians, for example, can help monitor drug side effects as reflected in patients’ symptoms, oral hygiene, nutritional status, overall health and fitness, and capacity to carry out activities of daily living. The pharmacist’s role is equally important in offering assessments and documentation of any adverse drug events, suggesting drugs with lower risks of interactions, educating the patient and caregiver—and perhaps allied health professionals—on drug interactions, especially when it comes to interactions with health supplements, vitamins, and alcohol.

With concerted effort and coordinated action among members of a patient’s health care team, optimized drug therapy that maintains good health and function in older adults is an attainable goal.