Dr. Howard Bergman prefaced his discussion of the increasing burden of chronic disease and aging with a slide series featuring images of aging individuals from around the world. The photographs offered diverse examples of visible frailty and decline, as well as obvious health and resiliency into late age, highlighting the profound heterogeneity of aging adults.

Current Demographic and Epidemiologic Shifts
The world’s population is aging; the worldwide demographic and epidemiologic transitions associated with increasing life expectancy and a rapidly aging population is recognized as one of the challenges of our time. That the population of Western nations is aging is commonplace knowledge; however, this trend is not a limited but rather a worldwide shift.

There is an overall increase in life expectancy: over the last five decades, life expectancy at birth increased globally by almost 20 years, from 46.5 years in 1950-1955 to 66.0 years in 2000-2005. The global average annual growth rate of persons aged 80 years and over (3.8 %) is currently twice as high as the growth rate of the population aged 60 and over (1.9%). The 80-plus age group is expected to remain the fastest-growing segment of the population (Figure 1). 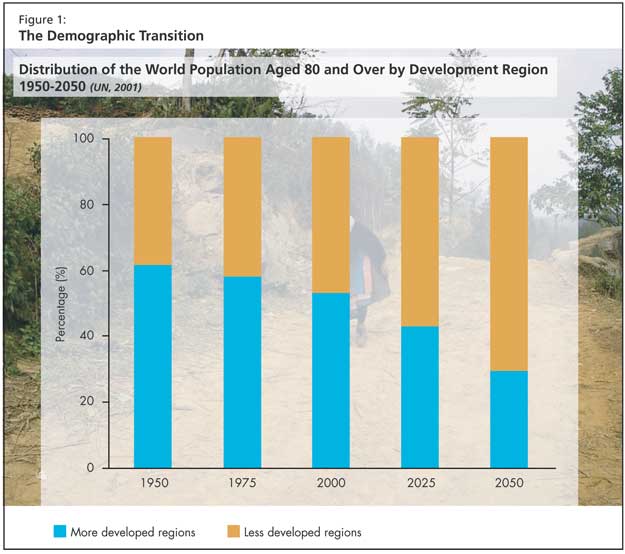 The demographic transition began earlier in the more developed countries, but poorer regions are currently experiencing similar changes within shorter time spans. When compared with demographic transitions in France, for example, Mexico is aging six times more rapidly. Dr. Bergman presented statistics showing that through 2050, 70% of the world’s older persons (80 and over) will be living in developing regions. In both developed and developing countries the complex effects of improved living conditions, education, medical care, and accessibility to health care are promoting longevity. Additionally in developing countries older adults are living longer due to improved sanitation, nutrition, and infection control.

This shift has led to an increase in the prevalence of chronic diseases and the potential number of older persons living with disability. These conditions pose important challenges to health care systems. Dr. Bergman cited a recent World Health Organization (WHO) report that ranked health care systems worldwide according to criteria that included the capacity of the care system to improve the health of the population, meet health care needs, assure quality of care, offer responsiveness and equity in the provision of that care, including toward vulnerable groups, and the cost efficiency of the system. France ranked first; indicators of Canada’s performance were ranked below expectation and were outmatched by countries thought to be on the margins of the developed standard, such as Colombia.

The Effort to Increase Active Life Expectancy
Increased longevity in both the developed and developing worlds often results in a longer period of life being spent with chronic disease.

The forces driving longevity are off-set by forces that serve as risk factors for the evolution of chronic disease such as poor dietary habits (the so-called worldwide “McDonaldization”), reduced physical activity, and increased tobacco use (particularly in developing countries as tobacco companies shift their focus away from the increasingly nonsmoking developed nations). Increased longevity also translates into prolonged exposure to chronic disease risk factors.

Health care systems around the world will increasingly struggle to manage a high proportion of older persons with disabilities and chronic disease, a segment of the population that is heterogeneous and has complex needs. This burden is also borne by older people themselves, along with their families, communities, and societies. Poorly managed chronic disease drives disability. If rates of disability can be mitigated, further improvements in life expectancy will result.

Signs of Improvement
Over the last several decades, researchers have witnessed an overall decrease in the rate of disability. Dr. Bergman cited data accrued from longitudinal studies of aging that show strong associations between lifestyle risks factors and the incidence of disability.

In the United States, it has been shown that improvements in individual health habits have led to increased survival and postponement of the age of onset of disability. Successfully implemented preventive strategies and screening protocols (e.g., prostate-specific antigen, bone density) have changed the onset of chronic disease. Additionally, improvements in health care systems, along with pharmaceutical and technological advances, have reduced disability related to the most disabling chronic diseases (hypertension, diabetes, hyperlipidemia). Improved surgical strategies for ailments affecting older adults (joint replacement, cataract surgery) have delayed or prevented disability. Finally, socioeconomic factors such as improved education, incomes, and working conditions have produced overall health improvements and reduced disability.

Emerging Challenges in the Developing World
The key question is whether the resources will be available to address the rapid changes in the developing world. Developing countries are experiencing sudden changes in a context of limited resources. Their health care systems are not optimally adapted to the complexity of managing and treating chronic disease, frailty, and dependence. Finally, socio-economic and demographic shifts are exerting a negative influence on health outcomes in the developing world: family members are not filling in supportive gaps as they once were, and transgenerational households are on the decline, as developing nations experience increased numbers of women in the paid workforce (rather than remaining informal caregivers), and children leaving their villages or going abroad in search of economic opportunity.

According to Dr. Bergman, a 1-2 year delay in the onset of disability/dependence can make a significant difference and directly reduces needs for long-term care and institutional resources. A shift toward an older population at risk for chronic disease and disability calls for health systems that on the one hand reduce the number of people who develop disability and lose independence, but on the other hand are able to provide for people who do develop disability and are dependent.

Not all strategies pursued in the developed world are transferable. Dr. Bergman observed that Canada relies on a strategy of screening and treatment of high-risk individuals, but this is ill-matched to the resources of developing countries. The WHO advocates health prevention and promotion in developing nations incorporating a community-based approach. If community health professionals were to implement strategies in the Asia/Pacific region that lowered blood pressure by 3 mmHg, this could lead to as many as 1 million fewer deaths from stroke by 2010, claimed one study Dr. Bergman cited. Another study by the WHO concerned a community-based intervention aimed at reducing salt intake in Tianjin, China, which had important effects of improving health knowledge, decreasing salt intake, and decreasing systolic blood pressure.

Dr. Bergman stated that research points toward a need for developed nations to better incorporate the community primary care approach to providing care for older persons with complex needs. This means accelerating the trend away from creating more “bricks and mortar” facilities (hospital and nursing home beds) toward strategies promoting living in the community. The latter have been associated with greater longevity. Governments need to invest in strategies supporting family/community involvement; integrate traditional healing resources, and train a workforce focused on mitigating the onset and effects of chronic disease.

Conclusion: International Collaboration and Knowledge Exchange to Support Effective Health Interventions
Effective interventions must go beyond instituting projects in one city or town, Dr. Bergman stated. Integrating improvements aimed at delaying onset of chronic disease must occur on a system-wide level. He encouraged listeners to consider how they could contribute to the effort and put the information he presented into their research perspectives. The effort to coordinate approaches and add to the evolving knowledge on frailty, studies on aging interventions, and information and policy exchange will help promote a coherent and responsive system of care that can meet this global challenge.